The confirmed line up for the 3 day event also includes: The Red Arrows, the Eurofighter Typhoon FGR4, King Air B200, The Tigers Freefall Parachute Display Team, and the Battle of Britain Memorial Flight aircraft – the Hawker Hurricane, Avro Lancaster and The Spitfire.

The event takes place on Friday 10th June, Saturday 11th June and Sunday 12th June and will have activities on the ground as well as a military and civilian flying program.

The latest addition to the line up, The AeroSPARX team will be flying on Friday night. They are new to the airshow world and are set to revolutionise it with a number of exciting innovations. AeroSPARX is unique in airshow circles as it has special clearance to fly at night with pyrotechnics that light up the sky.

With smooth and graceful aerobatic manoeuvres, the display showcases the best of motor glider aircraft Grob109. This quality formation flying with spectacular wing-tip pyrotechnics is a spectacle. 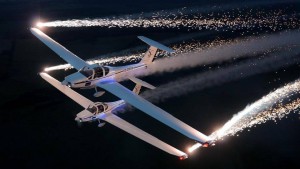 Lighting up the sky – The AeroSPARX team

Torbay’s Elected Mayor, Gordon Oliver, said: “AeroSPARX bring another exciting element to the airshow and kicking off our flying programme with pyrotechnic night flying. The motor glider will be familiar to many British cadets as the RAF has used the Grob109 as a training aircraft since the 1908s. The large wings provide an impressive level of glide performance and the airbrakes offer excellent landing control.”

Executive Lead for Culture, Tourism and Harbours, Cllr Nicole Amil, said: “Our flying programme is starting to come together and it promises to be an outstanding weekend event for all the family. Flying with fireworks is not new but the AeroSPARX team has several innovations not seen before at airshow flying displays in Europe.”

The AeroSPARX team brings together two extraordinary world renowned pilots for its first year of flying. Team Leader, Guy Westgate is famous for introducing his dazzling pyrotechnic displays into the UK and thrilling crowds across Europe in his stunt glider, GliderFX Fox. Tim Dews is better known in Britain as ‘Mr Grob’ having run a successful business maintaining the aircraft since 1986 and is fast becoming recognised on the circuit as an accomplished display pilot.

For more information and to find out about Sponsorship and exhibiting opportunities available, visit www.torbayairshow.com