A host of aliens, Star Wars Goodies and Baddies, and Daleks will descend upon Torquay Museum on Saturday 25th July in an action-packed Schools Out celebration of the Museum’s blockbuster summer Sci-Fi exhibition, Visions of the Future, which runs until 5th September.

“The Museum’s Sci-Fi exhibition launch day in June was such a massive success that we decided to get our costumed Sci-Fi friends back to help children celebrate the beginning of the school holidays,” says Torquay Museum’s Carl Smith. “So come and meet your favourite Sci-Fi characters in person, between 10am and 4pm on Saturday 25th July, when Stormtroopers, Darth Vader, Darth Maul, Chewbacca, Daleks, aliens and more will be entertaining and scaring visitors.” 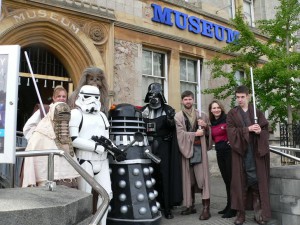 The Museum’s Visions of the Future exhibition showcases rare and stunning costumes and props from some of the best science fiction movies and TV series ever made, including Star Wars, Dr Who, Alien, Fifth Element, Star Trek, Predator and many more.

Highlights of the Sci-Fi exhibition include a very rare original lightsabre from the Star Wars film Attack of the Clones, together with an imposing full-sized exact replica of Darth Vader’s costume and the iconic R2D2. Some of Doctor Who’s arch enemies also make an appearance, including a Dalek, and Davros, as do Tom Baker’s and Matt Smith’s original Doctor’s Costumes, and some iconic props such as an original Tardis key and sonic screwdriver.

“As well as our impressive collection of Star Wars and Dr Who costumes and props, we also have some other amazing and rarely-seen pieces,” said Carl Smith. “The seven foot tall Mondoshawan alien costume from the film Fifth Element is stunning, and it was reputedly so heavy and hot that the actors who operated it could only stay inside it for 15 minutes at a time.”

Also on show is the very rare Kane’s spacesuit from the original Alien movie, together with a huge sleep pod, with lighting effects, from the Alien movie Prometheus.

Visitors can also come face-to-face with a huge Predator from the movie of the same name, weapons and props from the Star Trek movies, Marty McFly’s hoverboard from Back to the Future, a battle-scarred robot from the film I, Robot starring Will Smith, and a T-X costume from Terminator 3. The prototype of the Beagle 2 Mars spacecraft that touched down on the Red Planet in 2003 is also on display.