Torbay Boxers Owen Underhill and Kai Draper both boxed in Bridgwater on Friday. Following on from the success of their home show, it was another great fantastic evening for Torbay ABC as both boxers won their bouts. 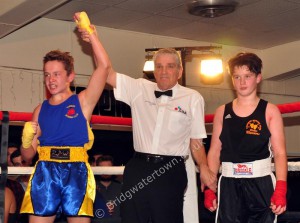 The first Boxer to take centre stage was Owen, after starting the first round very well, he came out in the second round to prove he is a fearful boxer in the ring. In the third round, the flurry of quality tactics used gave Owen the well deserved win.

Kai Draper took to the ring shortly after Owen, keeping his opponent under pressure from the get go giving him a standing eight count in the first round. Kai fought hard and well for the last two round before winning by a unanimous decision.

Junior members of Torquay’s Kenpo Academy proudly show off their amazing haul of 22 trophies. The trophies were won at the British Junior Kenpo Championships,  held by 6thDegree Kenpo black bel…