Update: Very sadly the woman has passed away. Her family have paid tribute – https://wearesouthdevon.com/tributes-paid-to-paignton-woman-who-died-following-collision/

A woman was seriously injured in a collision in Paignton at the weekend.

Police are investigating the collision that has left a 61 year old woman in a critical condition.

The incident happened on Hyde Road outside the big baguette at 3.19pm on Saturday, 2nd April.

It is believed that a grey Vauxhall Corsa driven by an 88-year-old local man mounted the pavement before colliding with a 61 year old local woman who suffered serious injuries and remains in a critical but stable condition at Derriford hospital.

The Big baguette shop front was also badly damaged in the collision. 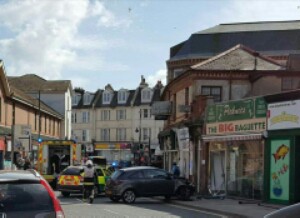 The driver of the Corsa was taken to Torbay Hospital with minor injuries and has subsequently been released.

Following the collision there was reports of the smell of gas and therefore properties in the immediate vicinity were evacuated; both Fire and ambulance were in attendance.

A specialist forensic investigation of the scene took place. Officers from the Serious Collision Investigation Unit are appealing for witnesses to this incident, and are particularly keen to trace a cyclist who was believed to have been overtaken by the Corsa immediately prior to the collision occurring.

If you have any information that could help with the investigation, please contact police on 101@devonandcornwll.pnn.police.ukquoting log number 467 for the 2nd of April.