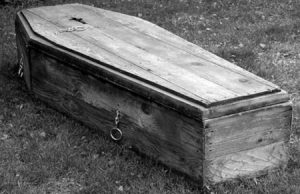 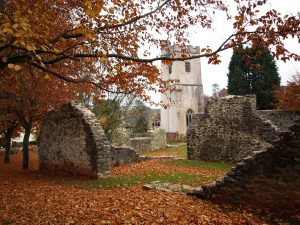 During the mid eighteenth century Colonel Richard Ellicombe married into the Brown family of Kingskerwell. They lived at the Manor House in the village. Mrs Brown died first in 1782 and the Colonel lived on alone. The widower, however, was “a fat disagreeable old man who loathed little boys and pigs, and in old age boasted that he had never seen a boy or a pig in his life without hitting it”. Not surprisingly he was disliked by his family and the local community. More unforeseen was that the animosity of his family would continue after both his death, and theirs. 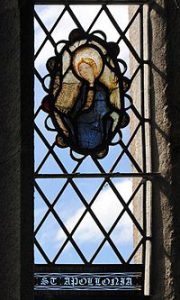 When the colonel died in 1804 he joined his wife in the Brown family vault of Kingskerswell Parish Church. It was common for well-off families to have an underground ‘burial’ chamber for the interment of deceased family members. These family vaults were privately owned, often beneath a church, in this case under the high alter, and with a stone slab entrance and stone steps into the chamber. Whenever a family member died, the vault would be opened and the new coffin containing the deceased would be placed inside after the funeral. 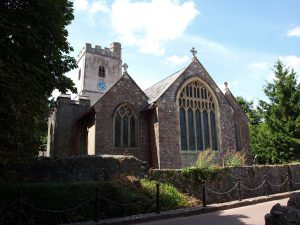 Yet, whenever the Brown family vault was opened to receive a new resident, the Colonel’s coffin was always found on the top step. The explanation given was that the presence of an unwanted outsider – even one who had shuffled off its mortal coil – was resented by the Brown family, both living and dead. The deceased ones disliked the old Colonel so much that they constantly tried to push him out – his coffin was then  always to be found lying on the topmost step, this being as far as they could get him.

Yet, moving coffins seemed to be a big thing back in the nineteenth century. The European magazine of September 1815 told of the case of ‘The Curious Vault at Stanton in Suffolk’ in which coffins were “displaced” several times under mysterious circumstances. They were also recorded in a Lutheran Cemetery on the Isle of Oesel in the Baltic Sea in 1844. In 1867 FA Paley told of an incident when his father was the rector in the parish of Gretford, near Stamford Lincolnshire. Paley Senior noted that two or three times the coffins in a vault were found on reopening to have been moved around.

The most famous case, however, was from a church in Barbados between 1812 and 1820 where coffins were supposed to have moved inside the vault with no reasonable explanation (pictured above). The first account was given by JE Alexander’s Transatlantic Sketches (1833). In 1906 the folklorist Andrew Lang investigated and found nothing to substantiate the story- the newspapers of the time didn’t mention it. All of these took place in the 1800s and moving coffins then seem to have gone out of fashion – they don’t seem to have been mentioned in the twentieth century. 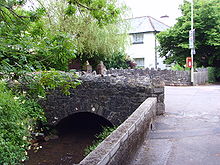 We hate doing this, but there may be a rational explanation for Kingskerswell’s Creeping Coffin. Kingskerswell Church is in a valley and next to a stream (pictured above). The vault was known to flood sometimes so it’s possible that the Colonel’s coffin was the only one that was airtight. Perhaps it was carried by the rising water and deposited on the top step – when the rain stopped it was left there.