Above the natural arch of London Bridge is the limestone plateau of Daddyhole Plain. Unlike London Bridge, which was named probably in the mid eighteenth century, the name Daddyhole is far more ancient – Daddy being an Old English name for the Devil. 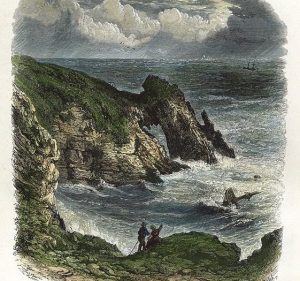 According to local legend the Devil lives in a cave at the bottom of the cliff – a cave formed when a slab of limestone fell into the sea creating the Devil’s Hole or Daddyhole. There are many Devil’s Holes across Europe and the United States, and they often acquired a reputation for uncanny occurrences, as in the Torquay example.

We know about our supernatural Daddyhole thanks to an anonymous female author in the middle of the nineteenth century. During the early 1800s, Torquay was being transformed from a small fishing village to an upmarket seaside resort. The Victorians were intrigued by the occult and so the author of the 1850 book ‘Legends of Torquay’ set off to supposedly recover folk tales of the area before they were swept away by modernity.

One of the legends allegedly told to the writer was of the ‘Demon Hunter of Daddyhole Plain’. The focus of the story was Matilda, “a proud and beautiful maiden who dwelt in the valley yonder”. Matilda was in love, but the object of her affections loved another and she took the news badly.

As she walked on the Daddyhole cliffs at night in the misery of unrequited love, Matilda was confronted by “two savage hounds with eyes of fire”. Following was the Devil on a horse – referred to in the story as the Demon Hunter. Apparently, “The arch enemy of man had chosen Daddyhole Plain as a favourite hunting ground”, and local villagers were familiar with the unearthly cries of his demon hounds at night. 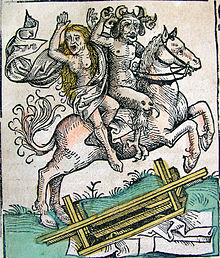 On seeing the demonic trio Matilda promptly fainted but woke to be told by the strange and handsome man, “I come hither to bewail alone the grief of disappointed hope, and found you, fair maiden, lying senseless on the ground.”

Having apparently rapidly moved on from seeing the Hellhounds and their demonic master, Matilda told the stranger of her rejection. He comforted her with the words: “You have been made to suffer much. Revenge is sweet.” Clearly not being familiar with Christian tradition she unwisely proclaims,“Revenge! I would barter my soul for to be revenged.”

Matilda remained filled with resentment and, with the stranger’s encouragement, stalks and stabs her ex-boyfriend to death as the sun sets over Daddyhole, crying, “Mine! Mine forever!”At this point in the tale, the stranger reappears and carries Matilda over the cliff edge on his satanic steed, never to be seen again. You can, however, still hear Matilda crying above the sound of waves breaking against the cliffs at the dead hours of the night.

The legend doesn’t say who the witnesses were to these events, or who wrote them down for our moral instruction and entertainment. 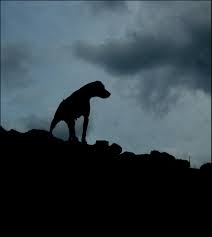 Such stories of Devil’s pacts were common from the Middle Ages up to the seventeenth century – giving us some idea of the original date of the story. These tales were widely publicised through pamphlets and portrayed the Devil as a trickster – they were also highly moral tales and used to reinforce social stability and order with the Matilda story warning against jealousy and revenge. 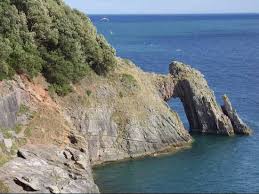 So that’s the story of the Demon Hunter of Daddyhole Plain. On the other hand, there are further possibilities – a wily local could have just made up some or part of the story. Indeed, it may be more than coincidence that the hugely popular 1796 Gothic novel ‘The Monk: A Romance’ by Matthew Gregory Lewis also has a character called Matilda. This Matilda was similarly a beautiful young woman who has sold her soul to the Devil, and also loves a man who no longer cares for her.

Here’s another local Devil myth – that of the Parson and the Clerk, the twin stacks located near Dawlish which can be seen from the railway as it runs through the Parson’s tunnel.

Many versions of the story exist but the tale relates how a Bishop of Exeter fell ill and came to Dawlish to restore his health. However, an ambitious local priest aimed to be his successor and – along with his clerk – often made the journey across Haldon Moor to check on the Bishop’s condition. One night, in a terrible storm they lost their way and the priest abused his clerk with the words, “I would rather have the devil himself, than you, for a guide”. Then appears a mysterious horseman volunteering to help. 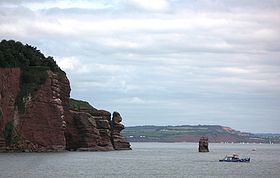 He leads them to a brilliantly lit mansion and invites them to a sumptuous feast. They then hear that the Bishop is dead but find they cannot leave – their horses won’t move. After using his whip and spurs the priest cries “Devil take the brutes”, upon which the guide exclaims “Thank you, sir. Gee up”. The guests at the feast turn into demons and the horses gallop over the cliff, carrying the parson and the clerk with them. The Devil turns both parson and clerk to stone, facing forever seaward, monuments to their greed and ambition.

This story appears in 1848 – two years before the Torquay book – in the anonymously-written ‘Legends of Devon’ collection. However, a correspondent to ‘Notes and Queries’ in 1868 said that all the stories in the collection were original fiction without any basis in folklore. He wrote,“The legends in question were severally composed by members of a very agreeable little private society, some thirty years ago, of whom I was one. I can say pretty confidently from memory, that they were each and all original whims of the moment, and not reproductions of popular legends”.

Another association between the two stories is that smugglers would invent or spread such tales to keep the curious away from the cliffs at night while they carried on their profession uninterrupted.

But let’s give the original Torquay storyteller the benefit of the doubt. And so, the next time you find yourself late at night at the edge of the Daddyhole cliffs, listen very carefully. You may be able to hear Matilda’s wails amidst the howls of the Demon Hunter’s hounds…

Torbay gets the ‘Flu