Was ‘Domnu’ the first god of Torbay?

On the Churston limestone plateau, in the field system on the cliff top at Babbacombe’s Walls Hill, and in earthworks at Warberry Hill, Great Hill and Gallows Gate, there are still traces of the Bay’s original inhabitants. 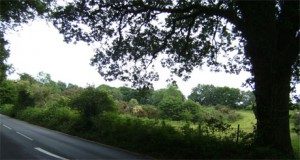 There are also enclosed hilltop sites at Milber Down and Berry Head. These were originally thought to be forts, yet such earthworks are often too large to be defended or in places that were exposed to the elements. Consequently, they are now being seen as places where religious rituals were carried out.

And it’s been suggested that old names could hint at past beliefs- Daison could derive from the Old English daegsan meaning ‘a sacrificial stone’, while Blacks Hill may come from the word sacred. 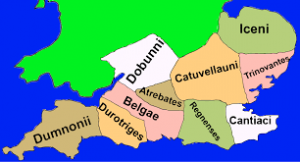 These are the settlements and places of the first natives of Torbay – who would become known as the Celtic Dumnonii people. The Dumnonii were the tribe who inhabited Dumnonia, which is now known as Devon and Cornwall, along with parts of present-day Dorset and Somerset. They lived in Torbay from at least the Iron Age up to the early Saxon period.

For the sophisticated folks of Greece and Rome the Britons were a strange barbaric people on the fringe of the Empire. The early 3rd century Roman Solinus, author of ‘De mirabilibus mundi’ (‘The Wonders of the World’) called us the ‘Dunmonii’, while Ptolemy (cAD 100-c170) from Alexandria called us the ‘Damnonii’.

Julius Caesar said that these men wore their hair long, had moustaches and wore animal skins. He also said they shaved their bodies and painted themselves blue in battle. They buried their dead though few bodies have been found – this may be because they were left exposed in the open air to decompose. Roman writers also wrote about the Celts’ spiritual leaders, the Druids, who believed in the afterlife and made human sacrifices. On the other hand, the Romans were hostile to the Druids, so this may just be propaganda.

When the Romans established a 42-acre fort in around AD 55, at the southwest terminus of the Fosse Way, this served as the base of the 5,000-man Second Augustan Legion which would dominate south Devon for 350 years. The Romans referred to this as Isca Dumnoniorum, ‘Watertown of the Dumnonii’- we know it as Exeter.

Yet, Devon was never as Romanised as Somerset and Dorset, with evidence of occupation limited mainly to the area around Exeter- the newly discovered Ipplepen settlement has challenged old orthodoxies, however. Nevertheless, the Dumnonii seemed to have maintained a tradition of independence.

The assumption is that there were many original Dumnonian gods linked with nature and specific places. During the 355 year occupation this tradition wasn’t challenged – both the Romans and Britons believed that as well as supreme or general gods, there were also local gods or spirits or genii. Accordingly, although they suppressed the Druids, the Romans were largely tolerant of other religions, provided that the conquered incorporated the Imperial Cult into their worship. Indeed, the Romans often sought to equate their own gods with those of the local population giving us hybrid divine beings – a process known as syncretism – together with ancient local deities and new cults. At Bath, for example, the goddess Minerva was identified with the local god Sul, so the Dumnoniian gods may well have been similarly absorbed. 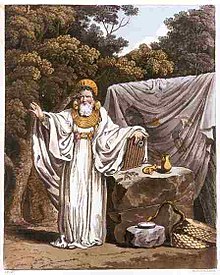 It’s not clear when Christianity was introduced to Britain, though it became increasingly popular amongst the elite in the 4th century after the conversion of the emperor Constantine in AD 312. By AD 391 Christianity was the official Roman religion, but pagan beliefs remained and it’s unlikely that Torbay was Christian at that time.

By the beginning of the fifth century Rome was under attack and the imperial dream was disintegrating. The Romans left to defend what remained of their Empire and in AD410 the Roman Emperor Honorius sent a farewell letter to the people of Britain. He wrote, “fight bravely and defend your lives…you are on your own now”.

Britain then fell into chaos. The Anglo-Saxon settlement of Britain began as the land gradually became occupied by pagan invaders from northern Europe. From the mid-fifth to early seventh centuries this process of settlement changed our language and culture, from Romano-British to Germanic. These Germanic-speakers, themselves of diverse origins, eventually developed a common cultural identity as Anglo-Saxons and established kingdoms in the south and east of Britain, later followed by the rest of modern England.

Yet, it took a long time for Anglo Saxon raids westwards, beginning about 660, to end with a final conquest of Devon by Wessex under King Aethelstan. Certainly, the far South West remained ‘Celtic’ for much longer than other parts of England. This could be where we get the origins of the legend of King Arthur – the leader of the Romano-British and, possibly, Christian resistance to pagan Anglo-Saxon invaders.

Nevertheless the far west did fall to the Anglo-Saxons, by then converted to Christianity. In 927 Aethelstan expelled what he called “that filthy race” of Britons from Exeter. And in 936 it was recorded that there was a battle against King Howel of the West Welsh at Haldon Hill above Teignmouth where the Celts were finally routed – ‘West Welsh’ in medieval English sources usually refers to the Cornish or Dumnonians. It was Aethelstan (AD 924–939) who fixed the boundary between the English and Cornish peoples at the east bank of the River Tamar. 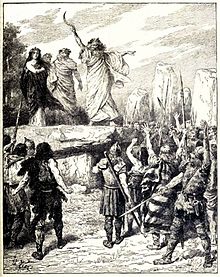 Devon would take its name from those original inhabitants. William Camden in his 1607 edition of ‘Britannia’, described Devon and Cornwall: “The Country of this nation is at this day divided into two parts, known by later names of Cornwall and Denshire; by the English Saxons it is known as ‘Deven-schire’, whereof grew the Latin name ‘Devonia’, and by that contraction which the vulgar people useth, ‘Denshire’.”

It looks like Camden was the origin of the interpretation of Dumnonii from ‘dumno’, meaning “the deep” or “the earth”. Hence, Devonians as, “the deep valley dwellers”.

From being a backwater in the spiritual life of the nation, it was in 1196 that the Bay became a centre for Christianity when six Premonstratensian canons from the Welbeck Abbey in Nottinghamshire founded Torre Abbey. 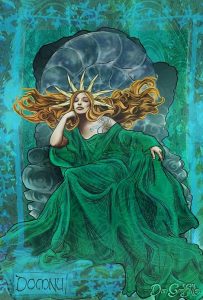 This modern illustration of Domnu is by Dan Goodfellow

So we don’t know who the first god of Torbay was. However, the Welsh scholar Sir John Rhys (1840-1915) has proposed that the tribal name of Dumnonii was derived from the original Devonians’ deity. This was ‘Domnu’, “the goddess of the deep”. If that is correct, then it was Domnu who was the first god of Torbay – and she may be out there still.