The Vikings come second in Torbay

The Anglo Saxon Chronicle records that in the year 850AD:

“Here Ealdorman Ceorl with Devonshire fought against the heathen men at Wicga’s stronghold and made a great slaughter there and took the victory.”

This event was related in the Anglo-Saxon Chronicle, a collection of annals in Old English chronicling the history of the Anglo-Saxons. The original manuscript of the Chronicle was created late in the 9th century, probably in Wessex, during the reign of Alfred the Great (reigned 871–899). Multiple copies were then made of that one original and then distributed to monasteries across England, where they were independently updated.

That’s pretty much all we know of the event, though we do know who the ‘heathen men’ were – they were the Vikings who were active in Devon and who would launch attacks and raids all around the coast and inland at Exeter, Tavistock and Lydford. 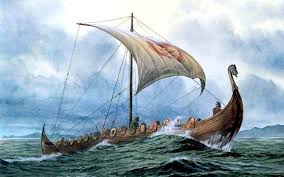 The first known account of a Viking raid came in 787, when three ships from Hordaland (in modern Norway) landed in the Isle of Portland, which can be seen from the Bay. They were approached by the royal reeve from Dorchester, the official who supervised lands for a lord, whose job it was to identify all foreign merchants entering the kingdom – they killed him. It’s likely that there were other incidents as in 792 King Offa of Mercia had already begun to make arrangements for the defence of Kent from raids perpetrated by “pagan peoples”.

In 793 the Lindisfarne monastery, off the northeast coast, was raided and it was here that the Chronicle described the Vikings as “heathen men”. The following year they sacked the nearby Monkwearmouth-Jarrow Abbey and in 795 they attacked Iona Abbey off Scotland’s west coast. This monastery was attacked again in 802 and 806, when 68 people living there were killed. After this assault, the monastic community at Iona abandoned the site and fled to Kells in Ireland. 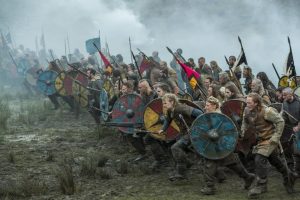 The attacks then became larger and more organised: in 835, the first major Viking raid in southern England took place and was directed against the Isle of Sheppey; the Anglo-Saxon Chronicle for the year 840 says that Aethelwulf of Wessex was defeated at Carhampton in Somerset, after 35 Viking ships had landed in the area. 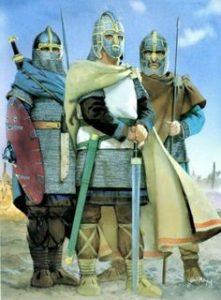 So it looks like the Vikings that landed in Devon in 850 came in smaller numbers – and perhaps the raiders were expecting little real resistance. However, this battle was won by the good men of the Anglo-Saxon ‘fyrd’, the locally mobilised militia (illustrated above and below). 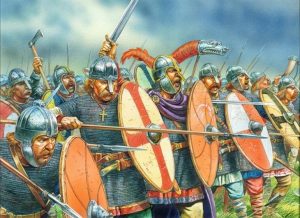 Although service in the fyrd was usually of short duration and participants were expected to provide their own arms and provisions, by the mid ninth century the fyrd had evolved as a reaction to Viking raids. Accordingly, Ealdorman Ceorl’s men may well have surprised the invaders with their numbers and professionalism – a nucleus of experienced soldiers supplemented by ordinary villagers and farmers from the area who would accompany their lords.

So, where was ‘Wicga’s Stronghold’ and the site of the Anglo-Saxon victory? 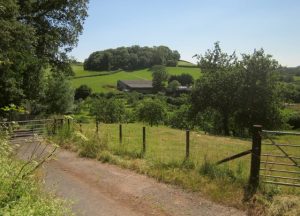 Although the battle site has not been identified, it has been suggested by scholars that ‘Wicga’s Stronghold’ or ‘Wicganbeorg’ could be modern day Weekaborough near Marldon.

(Thanks go to Derek Harper for the photo of Weekaborough above)