This Sunday sees the first broadcast by the BBC of their new 3 part mini-series of ‘The War of the Worlds’ starring Rafe Spall and Eleanor Tomlinson.

Unlike the 1938 radio broadcast narrated by Orson Wells, the 1953 movie starring Gene Barry, and the 2005 Tom Cruise version, the series is set in Edwardian Britain, and is the first British television adaptation of HG Wells’ Martian invasion novel … and there is, of course, a Torbay link.

The connection is the alien monsters in charge of the tripods that devastate earth – we first encounter their slimy cousins in Torquay. 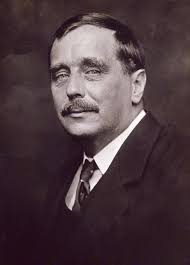 Herbert George Wells (1866–1946) is now best known for his work in the science fiction genre though he was also a prolific writer in many other fields, including contemporary novels, history, politics and social commentary, and even text books.

One of his most famous books was ‘The War of the Worlds’, but the seeds of this assault on mankind can be found in one of Wells’ early short stories which also involves assaults on humans by creatures from an alien environment. This was ‘The Sea Raiders’, published in the ‘Weekly Sun Literary Supplement’ on December 6, 1896.

The tale features a series of attacks by a species unknown to science – Haploteuthis Ferox – responsible for a wave of bathing fatalities and boating accidents along the South Devon coast.

It begins with a man called Fison walking along the cliffs between Sidmouth and Ladram Bay when he sights a human body lying in the tidal zone. Coming down to investigate, he finds that it is being devoured by a number of large and tentacled cephalopods. He attempts to drive them off the corpse but instead the creatures attack, “slowly uncoiling their tentacles, they all began moving towards him – creeping at first deliberately, and making a soft purring sound to each other.” They pursue him all the way back to the foot of the cliffs, and back off only when three local workmen stone them.

Fison describes these monsters as having, “…rounded bodies which were new and ghastly-looking creatures, in shape somewhat resembling an octopus, with huge and very long and flexible tentacles, coiled copiously on the ground. The skin had a glistening texture, unpleasant to see, like shiny leather. The downward bend of the tentacle-surrounded mouth, the curious excrescence at the bend, the tentacles, and the large intelligent eyes, gave the creatures a grotesque suggestion of a face. They were the size of a fair-sized swine about the body, and the tentacles seemed to him to be many feet in length.” 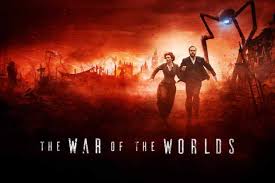 Other attacks take place. Notably, the story violates Victorian conventions in its treatment of innocents. When women and children suffer or die in Victorian fiction it was usually portrayed as a terrible event with a moral lesson. In ‘The Sea Raiders’, the deaths are incidental – Fison matter-of-factly, “remembered the boatload of excursionists. It had vanished. He looked back again, and there were now two boats floating, and the one farthest out at sea pitched clumsily, bottom upward.”

Of course, South Devon folk rapidly respond to the attacks: “The coast was patrolled all that evening and night by four Preventive Service boats, the men in which were armed with harpoons and cutlasses, and as the evening advanced, a number of more or less similarly equipped expeditions, organised by private individuals, joined them”.

Later in the story Fison considers the origin and motivation of the sea beasts: “A pack or shoal of these creatures may have become enamoured of human flesh by the accident of a foundered ship sinking among them, and have wandered in search of it out of their accustomed zone; first waylaying and following ships, and so coming to our shores in the wake of the Atlantic traffic.” 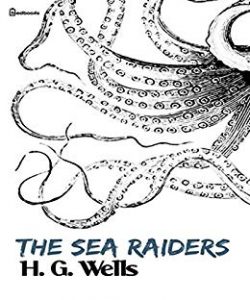 Eventually, at the story’s conclusion, the monsters are seen off, but they are still out there, “On the 15th of June a dead carcass, almost complete, was washed ashore near Torquay, and a few days later a boat from the Marine Biological station, engaged in dredging off Plymouth, picked up a rotting specimen, slashed deeply with a cutlass wound.”

Such squid-like horrors preying upon humans can later be seen both in Wells’ ‘The War of the Worlds’ (1898) and in the movie versions, including the latest where Tom Cruise and his daughter are given such a hard time. 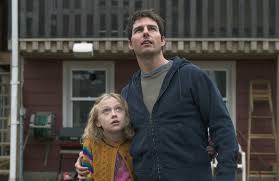 Indeed, Wells was largely responsible for the traditional twentieth century concept of the nonhuman alien archetype, having tentacles and oozing slime – this didn’t really change until the appearance of HR Giger’s shiny insect-like monsters in the movie ‘Alien'( 1979). 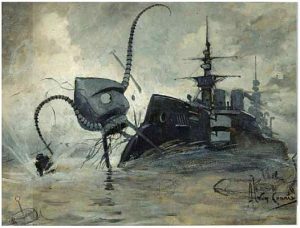 A further departure from Victorian tradition in Wells’ story is its lack of resolution. While the Sea Raid has ended, we never learn its cause or if it might happen again – “But it is believed, and certainly it is to be hoped, that they have returned now, and returned for good, to the sunless depths of the middle seas, out of which they have so strangely and so mysteriously arisen.”

So the next time you take a stroll along Abbey Sands, keep watching the waves out towards Harbreck Rock and the sea caves of Corbyn Head and Daddyhole. They may well conceal something tentacled, slimy and extremely unwelcome…

Here’s a full reading of ‘ The Sea Raiders’: